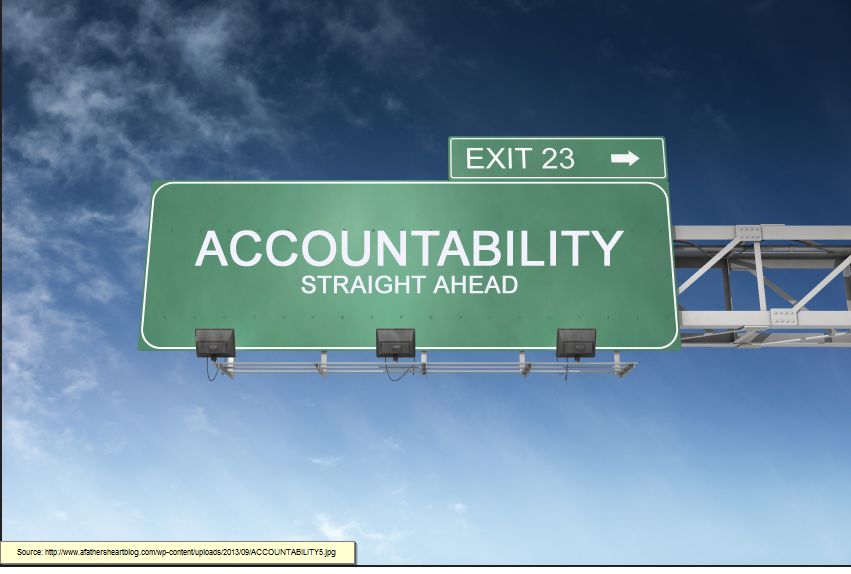 Well, that is the Ten Million Dollar Question, isn’t it?

God has a way of persistently putting things in front of us until we do something about it. That thing that continually shows up everywhere we turn, or that nagging voice in our head.

Accountability is that thing currently.

Just this past week accountability came up in a several different places.

Another was in a digital marketing group that I’m part of. One of the participants suggested that I spend some money on social media marketing, because when she made that financial commitment, she got her webinar done.

What about the subcontractor who installed some ceiling tile several years ago? This past week some of the tiles were starting to come loose. It had been long enough that they could have refused to do anything about it. They didn’t bat an eye…they simply came and fixed it.

Or there’s the situation with, J&J Contracting, a painting subcontractor that is working on staining and finishing nine wood doors. He had the doors stained and sprayed the clear finish with a new spray gun. After the first coat was on, he noticed there were runs. He worked to sand them out…to no avail. He could have made excuses that it was the new spray guns fault, but he didn’t. He is going to spend a sizable amount of money to buy new doors to replace them.

My proposal system needs the training that goes with it prepared before it’s ready to be marketed. This project has been dragging out for far too long. This is the mastermind accountability that I referred to earlier.

Why do we let ourselves avoid doing things we know we should do?

For me there are a few different reasons, all of which are in my control to do something about.

There’s fear – being afraid that we’re going to fail, we aren’t good enough, or it might cost too much. What about busy – I don’t have time to do that, it takes too long, and I already have these other things to do. Don’t forget uncertainty – I don’t know how to do that thing; it’s going to require me learning something new.

Now I’m going to start preaching to myself.

Several years ago, I wrote about filtering my life using my core values. There are a total of twelve different ones. I’ve written about all but three…one of those is being accountable. Guess what this post is about. 😊

Ultimately, my accountability is up to me. It is a choice.

It’s easy to put others ahead of myself. This makes my proposal system less important than construction projects…or does it? The question is, how many more contractors and customers could benefit from having my proposal system to use?

Just like in last week’s post about what my time is worth, I applied that new motivation to being more accountable. I ran the numbers and determined my time is currently worth $2.23 per minute or $133.80 per hour.

This is going to get scary…

I told you it was going to be scary!

What does this mean? This means, for me to reach this goal – it’s up to me to get this proposal system out into the world, and this means…to get it out there, I have to get the training ready, this means…it’s up to me!

God has given me a specific purpose.

Bridge the gap between construction companies and customers by providing:

Ultimately, it comes down to this…

What am I going to do about it?

P.S. I got the first draft of the Building a Better Proposal Workshop intro was done yesterday.