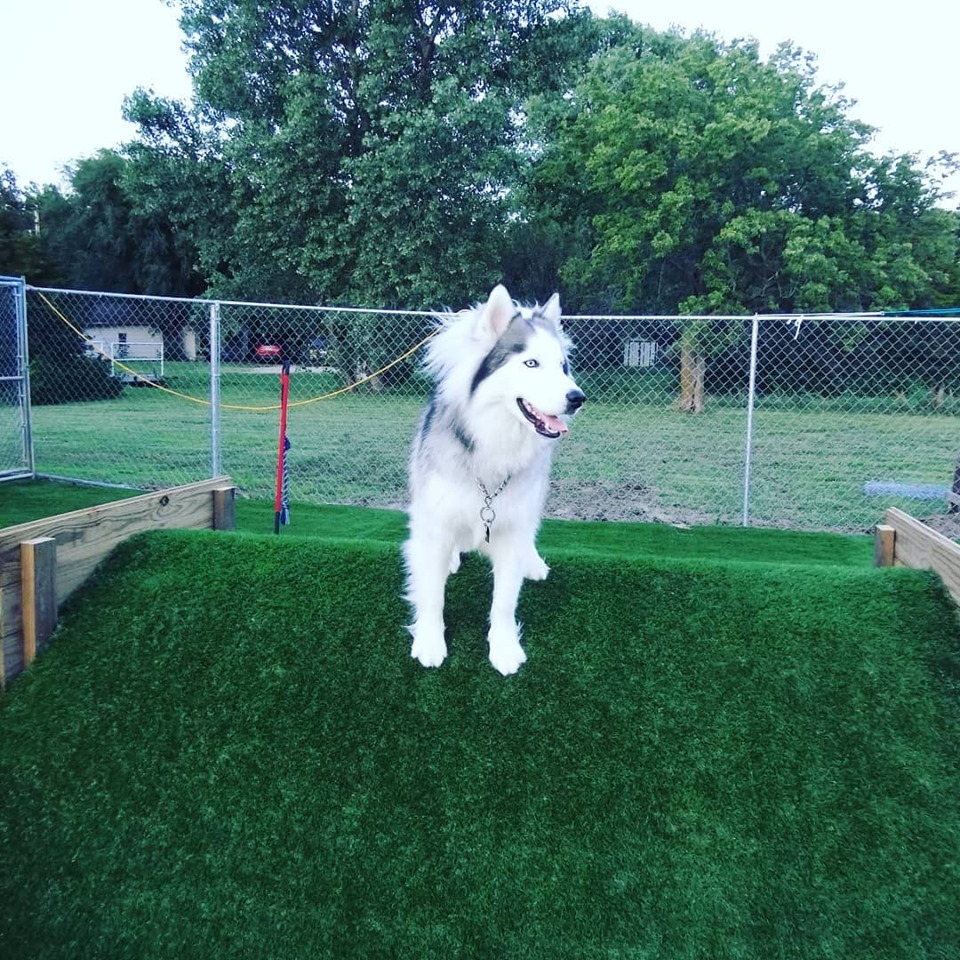 And What a Fun and Challenging Project It Was

We all expect things to take less time than they usually do. It’s no different when building an “out of the box” project like a dog playground. 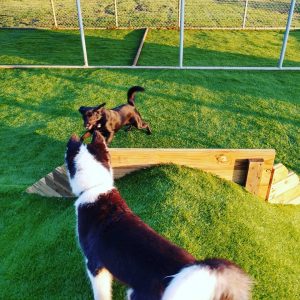 Last week I wrote about the expansion and updating of Prairie Paws Lodging’s facility and what the project consisted of. This week we will review the daily accomplishments and struggles.

Preconstruction activities – Before onsite work could go too far, we needed to finalize what materials/processes would be used for the out of the ordinary construction. Some of this was addressed in last week’s solution.

One challenge that we didn’t talk about was the need for 50-60 railroad ties. Our supplier wasn’t sure he had that many and couldn’t get more for a couple of weeks. I made a couple of calls and found more if we needed them.

With all the wet weather we’ve had, my go to trucking companies were behind schedule. This presented another major challenge, if we couldn’t get the sand and gravel we needed we weren’t going to accomplish much. Once again having the right connections we were put in contact with Dave Williams of D&Ts Hauling & Excavating, Dave came to the rescue and got us what we needed before we needed it.

Day 1 Monday – We began the day by gathering the first load of railroad ties and skid loader and got them to the job site. We disconnected and removed the portions of the existing fencing that would be relocated. Next we moved the existing pipe framed structure that served as a covered area for the existing run, this was also going to be reused.

The layout of the railroad ties was measured and marked. We placed the first few ties and filled between them with 4”-5” of fill sand and then 2”-3” of ¾” gravel flush with the top of the ties. This brought us out 8’-10’ along the 48’ long east side of the run. 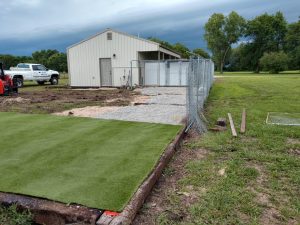 Day 2 Tuesday – We started by picking up the concrete culvert and delivering it to the site. Then we picked up where we left off and laid a couple rows of ties west to approximately where they were going to stop. We filled between them with the sand and gravel as before. Then we moved a roll of artificial turf to the raised pad where the building was going to sit and rolled it out.

Day 3 Wednesday – It rained overnight and made things too muddy for onsite work so, I took used the time for organizing and planning. 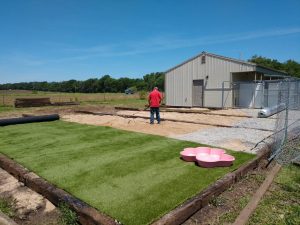 Day 4 Thursday – We laid rest of the east-west rows of ties, spread more fill and moved the remaining rolls of turf to the areas where the pad was prepped. I began digging the hole in the sand and gravel for the paw shaped pool to set in. To minimize future settling and give us the best base we began compacting with a vibrating compactor. This meant we needed to temporarily roll the first turf back out of the way of the compactor. It wasn’t fastened yet, so this wasn’t much of an issue.

Day 5 Friday – We picked up another load of ties first thing today. Then it was more ties, more sand, more gravel, more compacting, and more turf. We cut the ends of the concrete culvert smooth and set it in place. Today we got the first roll of turf lined up, squared up and stapled in place. We knew we were going to be short of sand. I called Dave and he wasn’t going to be able to get any today.

Day 6 Saturday – Dave called me and said he could get me the sand I needed. Thanks again Dave. We began by picking up 35 bags of Quikrete to use for building and shaping the hill. The first thing we did on site was move the building back into place. This was done by temporarily fastening some 2x6s to the ties over the turf to serve as skids, this went well. After it was in place, we pulled the temporary skids and bolted it down to the ties. We spent a big portion of the day designing and building ends for the tunnel/hill out of treated 2×6 tongue and groove. After they were built, we began stacking Quikcrete bags and filling around them with sand and gravel. We ran a few bags short of being able to finish the hill. 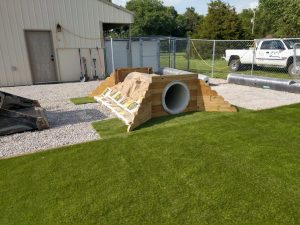 Day 8 Monday – It’s getting closer, but still much to do. More ties, more sand, more gravel, more compacting. We finished the hill with the extra bags of Quikrete, sand and gravel. The west side got an additional row of cross ties for future pens to sit on. We rolled out the turf to go over the hill and cut it as needed. Then we rolled out the last roll of turf and cut it around the building offset, remaining gate post and pool. All the turf seams were taped, and the perimeters were stapled down with a few exceptions in areas that needed some special attention. 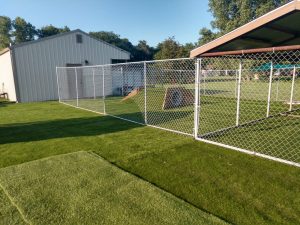 Day 9 Tuesday – Things are coming together. We reset the chain link fence in the new location, reattached the remaining fence to the building, hung the panels back in the end of the building. Using up the last of the ties, most of the sand, last of the gravel, and we built a raised pad for the new private cottage to sit on. Due to the elevation around the cottage pad we installed some drain tile to one of the downspouts on the original building and buried it in gravel to prevent water from becoming a pond. Next we moved the cottage onto the new pad.

Before we left Ann had dogs out playing in the new yard. 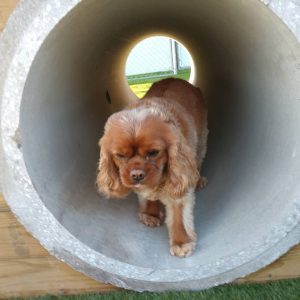 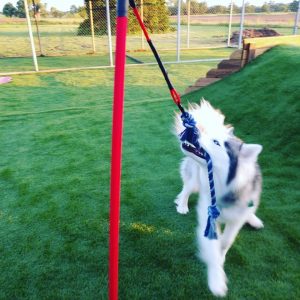 Day 10 Wednesday – We did some backfilling around the outside of the ties with the left-over sand and dirt. Loaded up and moved onto the next project.

There are still a few things to finalize. The fire hydrant fountain still needs to be plumbed, but we haven’t got the hydrant yet. I need to install a window AC unit in the new cottage. As is usually the case there will probably be a few more things that might come up. 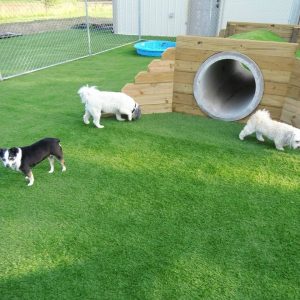 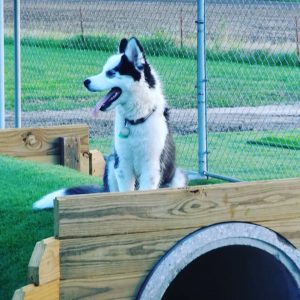